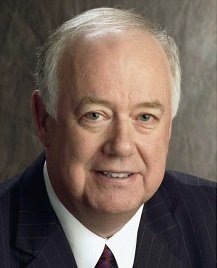 J. Barry Griswell joined Principal Financial Group in 1988 as agency vice president responsible for directing the company’s personal life insurance sales and distribution division. Having already built a distinguished career at Metropolitan Life Insurance company prior to his move, Barry rose quickly through the ranks at Principal. In 1998, he was named president and charged with overseeing the organization’s growth in the global retirement services market, as well as the company’s domestic retail businesses.

Passionate, driven and decisive, Barry’s straightforward manner meant everyone knew where he stood, but his collaborative nature and respect for other people’s expertise made him a truly effective leader not only in Iowa but across the nation.

Through the uncharted territory of taking Principal public – especially the grueling road show in the face of the 9/11 tragedy – to his calm, confident guidance navigating the economic crisis of 2008/2009, Barry played a key role in some of the industry’s most important days. His leadership and vision made a world of difference. And his experience overcoming adversity was invaluable. The more challenging the situations got, the more focused Barry became.

Throughout his 30-plus years in financial services, Barry led by setting a shining example of personal integrity: be generous with whatever you have – time, talent, money. Make a positive difference wherever you go. Care about others. To that end, Barry is the recipient of the national Alexis de Tocqueville Society Award, the Business Committee for the Arts Leadership Award, the Central Iowa Philanthropic Award for Outstanding Volunteer Fundraiser, the Ellis Island Medal of Honor, the Horatio Alger Association Distinguished American Award, the Oscar C. Schmidt Iowa Business Leadership Award, the Des Moines Register Iowa Star Award, the Mid-Iowa Council of Boy Scouts Distinguished Citizen Award, an honorary Doctor of Humane Letters degree from Grand View College, and is included in the Iowa Business Hall of Fame.

In retirement, Barry served as CEO of the Community Foundation of Greater Des Moines from 2008-2011. He remains an avid voice for social responsibility and community service.