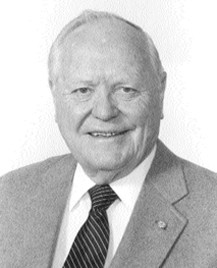 From its modest launch in 1945, H.H. “Red” Nelson, CLU, nurtured his fledgling Council Bluffs insurance agency to become The Silverstone Group, Inc., whose subsidiaries Redland & Associates, Mammel & Associates and Silverstone Consulting, form one of the area’s largest risk management and employee benefit consulting firms. In 1993, The Redland Group Inc. was merged into Acceptance Insurance Companies, Inc., a New York Stock Exchange Company. Mr. Nelson serves as chairman of the Redland Group, Inc. and one of its subsidiaries, Redland Insurance Company. He is past president of the Independent Insurance Agents of America and the Independent Insurance Agents of Iowa, whose top award is named in his honor.

The recipient of the prestigious IIAA Woodworth Memorial Award, Mr. Nelson has been named Outstanding Citizen of Iowa, U.S.A. Insurance Man of the Year and Omaha Business Men’s Association Man of the Year. In service to the community, he has served as president and director of a wide array of charitable organizations and area enterprises.