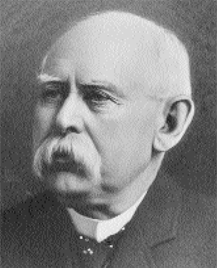 Born in Lebanon, Illinois, in 1831, Edward Temple accepted a clerkship at the Burlington, Iowa, post office when he was 15 years old.

Distinguished by his conscientious nature, firm sense of responsibility and dedication, Temple served as chief quartermaster in the U.S. Army at Fort Vancouver during the Civil War. He returned to Iowa in 1866, establishing himself as a respected banker and civic leader in Chariton.

In 1879, Temple met with five influential Iowa bankers to share his vision for an association that would provide inexpensive and dependable life insurance for bankers and their employees. Later that same year, Temple launched his dream and The Bankers Life Association was born. He served as the Association’s president until his death in 1909. During Temple’s 30-year watch, The Bankers Life Association grew into a $400 million giant—the largest and most successful assessment company in America at the time. The same company, now known as The Principal Financial Group, employs more than 17,000 people worldwide and manages more than $72 billion in assets.