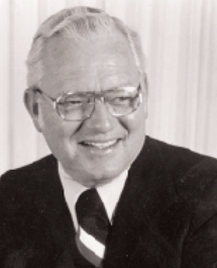 Born on the family farm in Woodward in 1917, Dean W. Mitchell earned undergraduate and law degrees from Drake University and practiced law in Des Moines during his early career. In 1948, Mitchell became assistant manager of Iowa Farm Mutual Insurance Company, quickly demonstrating his leadership ability and becoming general manager of the Farm Bureau Mutual and Farm Bureau Life companies in 1957. In 1968, he was promoted to executive vice president and general manager. At his retirement in 1982, Farm Bureau Life was ranked in the top 10% of all U.S. life insurance companies on the basis of total premium income.