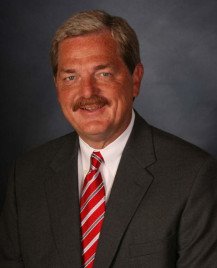 It is a real question whether Dana Ramundt should be honored more for his success for founding and building The Dana Company into a successful independent insurance agency or for being the driving force to reestablish the Vaughan Institute of Risk Management and Insurance in the Tippee College of Business at the University of Iowa.

After graduating from Eldora High School and from the University of Iowa with a degree in insurance from the College of Business in 1974, Ramundt began his insurance career with an independent insurance agency in Mason City. He worked in the independent agency system there and in Des Moines and then founded the Dana Company in 1989. Today his company serves clients in 22 states and ranks as one of the largest independent agencies in the state.

Along the way Dana served as president of two county independent insurance agent associations, as president of the Independent Insurance Agents of Iowa and as state director of the Independent Insurance Agents & Brokers of America for two years. He also served his community as county campaign chair and president of the Cerro Gordo United Way, and helped to found a Crime Stoppers program for the community. He has also served as a board member of Kaplan University for 19 years. He currently serves on the board of Project Invest, a national program associated with IIABAA, which introduces high school and college students to the insurance industry.

It was during his undergraduate years at the University of Iowa that Ramundt came to know Emmett Vaughan, both as his teacher and his friend. After Vaughan’s retirement from the U of I, the university eventually dissolved its program in the business school for insurance and risk management. Ramundt, recognizing the tremendous impact of the insurance curriculum on himself and the state at large, began lobbying the university to reestablish the insurance program. Not content to cheerlead passively, he began developing a fund raising program and committed himself to it to support a permanent insurance program at the university in the early 2000s.

The Vaughan Institute of Risk Management and Insurance was officially reestablished in 2004. Its first graduates received their certificates in 2006, and several hundred more students have graduated since. Over 300 students enroll in one or more of its classes annually. Additionally, the institute provides programs that include career coaching, resume and interview preparation, scholarships, internships, opportunities for full-time placement, and access to a career network.

Dana continues to support the Institute by sponsoring a golf fundraiser, and is a major contributor to the Vaughan Institute and other programs and activities of the University of Iowa. He is a life member of the U of I Alumni Association and a member of the U of I Foundation’s Presidents Club, which recognizes it most generous donors.