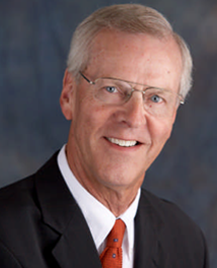 President and chief executive officer of Grinnell Mutual Reinsurance Company since 1991, Mr. Agnew began his insurance career with Grinnell Mutual in 1969 as a marketing representative in northern Illinois. In 1971 he was promoted to assistant marketing director in the home office where he quickly rose through the ranks.

Under his leadership, earned premiums increased 250% and the company expanded its writing territory from nine to eleven states and reinsured 292 farm mutual companies.

As president of the company, Dan encouraged and supported employees furthering their education in professional insurance studies. Grinnell Mutual established a sub-chapter of the CPCU Society to serve its employees at the company facility. One hallway in the company was designated as the Insurance Education Wall of Fame and notes all of their employees’ independent insurance agent and CPCU course completions and designations.

Dan obtained the rank of Eagle Scout while attending Grinnell High School. It was through this early training that Dan’s leadership skills began to shine. He is an active and visible volunteer in his community, especially with youth related organizations.

As a youth sports coach for over 30 years, Dan has been a consummate role model for adults and children alike. His commitment to the Grinnell Regional Medical Center, Chamber of Commerce, United Way and Junior Achievement is unprecedented.

His career has been dedicated to making a difference and he has a passion for helping others. As was noted in one of his letters of recommendation, “As the consummate role model, under his leadership and tutoring, a multitude of former employees have gone on to successful leadership positions in many companies around the Midwest.”

Dan and his wife Nancy have two children and keep busy following the school and sports activities of their grandchildren.