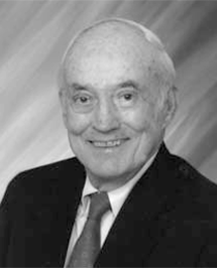 Ben received his CPCU designation in 1953, putting him among the early individuals in Iowa who received this insurance designation. He went on to serve as the seventh chapter president in 1958 – 1959 and was often asked to speak at CPCU seminars.

Ben served as LaMair-Mulock-Condon Co’s representative to Assurex International for over 25 years. He was elected international president of the organization in 1971 – 1972. Assurex, formed in 1954, has grown to include 130 independent insurance agencies worldwide with over 12,000 insurance professionals generating in excess of $16 billion in premiums.

During his career, he was involved with a number of boards, committees and fund raising activities, including the St. Augustin Church’s foundation board and the board of directors of the Wakonda Club, where he served as president in 1978.

Ben retired in 1991 after a 42-year career in the insurance industry.