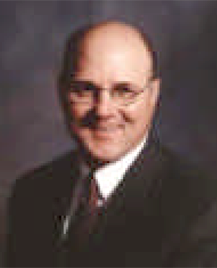 Bob Skow, a Drake University graduate, began his insurance career with Employers Mutual Insurance Company and later with IMT Insurance Company, working as a claims adjustor for both companies. In 1978, Bob took over ownership and management of an independent insurance agency in Guthrie Center, Iowa. In 1985, he was named the Independent Insurance Agents of Iowa (IIAI) Young Agent of the Year. While managing his own insurance agency, Bob served three terms as a representative in the Iowa Legislature. Mr. Skow was appointed to the IowAccess Advisory Council by Governor Thomas Vilsack.

Bob sold his agency in 1990 and joined the IIAI staff as director of government affairs and education. During this time, the IIAI gained national recognition for their educational programs. He is credited for his role as a provider and/or facilitator of continuing education classes for Iowa insurance agents for the past twenty years.

Bob was named CEO of IIAI in 2002. Under his leadership and in his role as their Iowa legislative lobbyist, the IIAI has developed and sustained an effective three-pronged government affairs attack: grassroots membership, a strong political action committee, and effective lobbying. Bob is highly regarded for his technical expertise as well as that in licensing, E & O (errors and omissions) insurance, and multi-peril crop insurance; his diligence in solution seeking; and his effective communication skills.

As Bob explains, under his direction, the IIAI has successfully fought to lower insurance company premium taxes, helped preserve crop insurance and keep it in the hands of independent agents, require that consumers needs be handled by licensed agents, helped limit the use of credit scoring in the underwriting of personal insurance, and advocated for meaningful workers compensation and health insurance statutes. Many legislators look to Bob for input on insurance-related legislative issues.

Bob has been active on behalf of school, church, and other nonprofit community organizations. As an advocate of the independent agency system, he says “Independent insurance agents are the backbone of their communities. They are the fabric of America, and it is wonderful to be in a position to represent such a phenomenal group of people. I take that responsibility very seriously.”