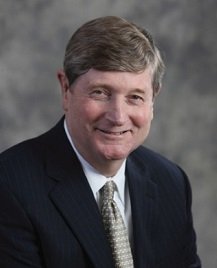 John Forsyth is chairman and CEO of Wellmark Blue Cross and Blue Shield, the largest health insurer in both Iowa and South Dakota, serving more than 2 million members.

Forsyth joined Wellmark as CEO in August 1996 and was named chairman in 2000. During his tenure, he has repositioned Wellmark as a health improvement company dedicated to serving the people of Iowa and South Dakota.

Under his leadership, Wellmark has achieved exceptional operating efficiencies and results. As testament, medical trend and administrative costs for Wellmark now rank among the lowest in the nation. Further, membership has grown by over 60 percent.

Believing that the extensive health care data maintained by Wellmark can be a powerful catalyst for action to improve community health, Forsyth has transformed the company’s sharing of appropriate information with community leaders, policymakers, customers and others. Complementing this approach, the company is currently on a journey to build a sustainable health care system by reducing the rate of increase in medical expenses and reducing the average rate increase to the level of the Consumer Price Index (CPI).

Under Forsyth’s leadership, the Wellmark Foundation focuses its philanthropic activities on key areas of health improvement for all Iowans and South Dakotans. The foundation awards more than $1.5 million annually to fund community-based health initiatives in Iowa and South Dakota. Since 1997, over $18 million has been awarded to nearly 450 grant recipients.

Forsyth served as president of the Federation of Iowa Insurers, and is a member of the Iowa Business Council, serving as chair of that organization in 2004. He has also chaired the board of directors of the Greater Des Moines Partnership, United Way of Central Iowa and the Variety Club Annual Telethon. He is a member of the National Institute for Health Care Management (NIHCM) board of directors and currently serves as chairman of that organization. He has chaired the Investment Committee of the Association of American Medical Colleges and in November 2008, was named to their initial board of directors. He served, and continues to serve, on numerous national committees of the Blue Cross and Blue Shield Association, including serving on its board of directors.

Forsyth is a long-standing champion of diversity and inclusion and under his leadership, Wellmark received the 2008 Better Business Bureau Integrity Award, the 2009 Sioux Empire Society for Human Resource Management Workplace Excellence Award, the 2010 Greater Des Moines Partnership Diversity Award, and the 2010 NAACP Merit Employer Award. In 2011, Forsyth was a recipient of the Diversity Journal CEO Leadership in Action Award.