On March 31, 1994 the initial steering committee of the Iowa Insurance Hall of Fame met at the The Kelley Continuing Education Programs at Drake in Aliber Hall on the campus of Drake University in Des Moines, Iowa. 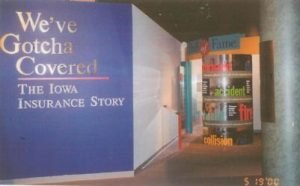 From it’s inception IIHOF wanted to have an exhibit, preferably at the Historical building, not only to honor the inductees, but to be an educational display for young people as well. A successful campaign was carried out with participation of all the major insurance companies and trade organizations contributing to the fund drive.

The exhibit was completed at a cost of $50,000 and was opened to coincide with the first induction of ten members on April 24, 1997. The exhibit was closed when the entire insurance exhibit was to be dismantled in 2003. Several other locations were considered, but none were acceptable because of location or cost.  Due to age and deterioration, the Exhibit was discarded in 2010

The physical display was transformed to a virtual display on the Internet by IIHOF board member Robert Conroy, CPCU, CIC, in 2006 using the WordPress web development platform. Additional content is added each year to keep the web site current including information about new inductees.

Today there are over 1,200 documents on the website and the IIHOF website hosts thousands of unique visitors each year.

There were ten initial inductees on April 24, 1997.  From 1998 through 2005 four new members were inducted each year. Starting in 2006, five new members are being inducted with the stipulation that at least one must be awarded posthumously each year. The five new inductees for 2014 brings the total members to 87 members.