Mesa, AZ – Margaret Ball, 83, died quietly May 23rd in the Memory Care wing of The Summit in Mesa, AZ. A memorial service will be held Saturday June 19, 2021 at 9:30AM at the Panora United Methodist Church in Panora, IA. Margaret was raised on a farm near Macksburg, IA and married her high school sweetheart Gary Ball. They raised 3 children in Norwalk, IA. They lived in Panora, on the lake, for several years before moving back to the Des Moines area.

Margaret had a 43 year career in the insurance industry. She retired from EMC Insurance Companies in 2001 after 29 years of rising through the ranks to become Executive Vice President of Underwriting. Margaret was inducted into the Iowa Insurance Hall of Fame in 2002.

She and Gary built their dream retirement home on a golf course with a mountain view in Gold Canyon, AZ. She attended Gold Canyon United Methodist Church and served as the church photographer for many years. Margaret loved nature and seeing the world. She enjoyed traveling, photography, gardening, motorcycles, camping, boating, water & snow skiing, snowmobiling, scuba diving and skydiving!

Condolences to the family: The Ball Family, 304 41st St. West Des Moines, IA 50265. Donations in her memory to the Alzheimer’s Association (https://act.alz.org/donate)

Ted was born October 14, 1937 in Des Moines, Iowa to Henry J. Lussem and Gertrude (Bychowski) Lussem. With the exception of a six year period in the 1960s when he lived in Springfield, IL and Grand Rapids, MI, Ted was a lifelong resident of the Des Moines area. He grew up on the east side and was a graduate of East High School.

For more than 60 years Ted worked in the insurance business starting with Crum & Forester Group in 1955, then Hawkeye-Security Insurance in 1957, then finally what was to become Brooks-Lussem Insurance, Inc. in 1968.

His civic involvement included: Trustee and past Chairman, Broadlawns Medical Center; Citizen Member, City of Des Moines Police and Fire Pension Board; Member, City of Des Moines Riverfront Improvement Commission; Charter Member, Pioneer Sons and Daughters Genealogical Society and their treasurer; Charter Member and treasurer, Des Moines Historical Society; and Board Member, Iowa Genealogical Society. He had been the President of the East Des Moines Club and he was the recipient of the 1994 Better Business Bureau’s Excellence Award. He also served over ten years on the Lutheran Hospital Patients Advisory Committee.

In the insurance industry, Ted was a Chartered Property Casualty Underwriter (CPCU). He had been President of the Independent Insurance Agents of Des Moines twice and was their Education Chairman and their treasurer for many years. Ted was also a member and past president of the Iowa Chapter of CPCU and their historian. He was also a member of the Insurance Association of Greater Des Moines and had received their CPIM designation in 2005. In addition he taught insurance classes at both Drake University and DMACC for several insurance organizations. In 1993, he was the author of a historical monograph titled “The Independent Insurance Agent in Des Moines” and in 2006 authored the 100th Anniversary Book on the Independent Insurance Agents of Iowa. Ted was treasurer of the Fire Mark Circle of the Americas and treasurer of the Iowa Insurance Hall of Fame organization.

Ted is survived by his wife of 63 years, Sherrie C. Lussem, and his niece and nephews. He was preceded in death by his parents, Henry J. and Gertrude Lussem, his sister Therese in 1954, and his brother Henry Jr. in 2010. In lieu of flowers, donations may be made to the Iowa Genealogical Society Building Fund at 628 E Grand, Des Moines, IA 50309.

Ben was born and raised in West Des Moines, Iowa and is currently a senior at The University of Iowa. He is working towards a Bachelor of Science in Finance and a Risk Management & Insurance Certificate and will graduate in Spring of 2021.

Ben has loved his time spent at The University of Iowa and accredits his exposure to the insurance industry to the university’s Vaughan Institute. Since he has dedicated a portion of his education to risk management and insurance, he has sought a variety of different experiences to expand his knowledge of the industry. This includes being a member of Gamma Iota Sigma (a business fraternity focused on insurance, risk management, and actuarial science), completing an internship at Holmes Murphy & Associates focused on Property Casualty insurance, and is currently an underwriting intern at GuideOne Insurance which he will continue through his senior year.

Upon graduating in the spring, Ben plans on staying in the Des Moines metro to pursue a career in the insurance industry, specifically in a role that allows him to work hands-on with clients or insureds. He believes the great education he got from The University of Iowa has put him in an excellent position as he enters the workforce. 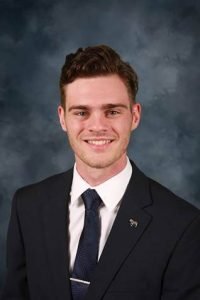 Dylan Gadberry is a junior at Drake University studying Finance and Actuarial Science. He would like to express his gratitude to the Iowa Insurance Hall of Fame for their recognition. He has passed two actuarial exams and will sit for his third in March 2020. He has been an Annuity Product Management Intern at Sammons Financial Group in West Des Moines, Iowa for the summer and school year, 2020. Dylan is a very active member of his college ministry, Campus Fellowship, and the treasurer for Young Americans for Freedom. He has also participated in an actuarial case competition at Traveler’s Insurance, where Drake’s team gained a second-place finish. While not working, he enjoys playing the guitar and long-distance running. He plans to work in the annuity and life insurance industry upon graduation in the Des Moines metro.

Due to the continuing health concerns surrounding COVID-19, the 2020 Iowa Insurance of Fame Dinner and Induction Ceremony slated for October 28, 2020 has been cancelled.  We do plan to award the scholarships to students at Drake University and University of Iowa this year as scheduled.  All nominees submitted for this … END_OF_DOCUMENT_TOKEN_TO_BE_REPLACED